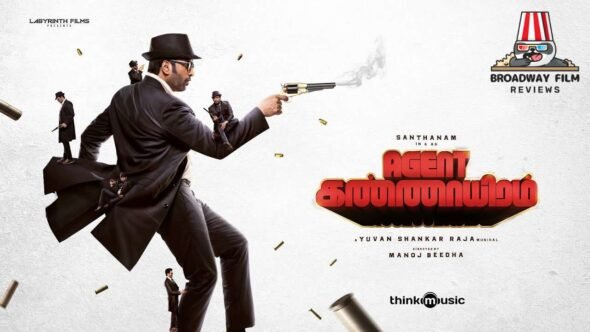 The film is a remake of the 2019 Telugu film “Agent Sai Srinivasa  Athreya” written and directed by Swaroop RSJ.

Kannayiram, a detective, forcefully stayed in his native village for the asset dispute over his family heirloom. Aadhirai, a documentary filmmaker who visits the village for her Project work meets Kannayiram for her interview. Later, Kannayiram involves in an unidentified dead bodies case.

The core of ‘Agent Kannayiram’ is quite solid; but there is not a single scene, moment, or performance that makes you feel good about this movie. Director Swaroop narrates a serious story of crime, cloaked in humor.

It isn’t an easy mix to deal with. The detective might look like he’s goofing around but he’s pretty good at problem-solving. He finds himself in the center of an all-consuming murky scenario.

Perhaps, Agent Sai Srinivasa Atherya relied on the “murky”  situations in which the small-time detective (played by Naveen Polishetty) found himself. Perhaps, the goal of the Telugu movie was to make the proceedings fun and enjoyable.

Having seen Naveen  Polishetty in a couple of movies, my guess is that Agent Sai Srinivasa  Atherya must have tapped into his strengths as an actor with a great sense of “comedy acting”.

Surprisingly in the remake, despite featuring a comedian-turned-hero in Santhanam, the inverse happens. The supposedly hilarious situations fall flat and the supposedly serious portions are surprisingly funny.

I gave myself an hour; two, to be frank. To see if I have it in me; to cough up something — anything — positive to say about this movie,  at least in the cloak of obligation for the sheer amount of effort by the unit.

Watching Agent Kannayiram brought back a personal memory, reminding me of something my college professor wrote in reply to a  feature article I had mailed him: “I am sorry, I have nothing good to  say about this; neither the writing nor the subject.”

I’m afraid I have to say the same thing about this movie, a remake of the Telugu hit  Agent Sai Srinivasa Atherya.

What is so great about the Telugu original is that they decided to remake it, I do not know because I haven’t seen it. This is what The  Hindureview said: “Director Swaroop narrates a serious story of crime, cloaked in humor.

It isn’t an easy mix to deal with. The detective might look like he’s goofing around but he’s pretty good at problem-solving. He finds himself in the center of an all-consuming  murky scenario.”

There is not a single scene, a single moment, or a single performance that makes you feel, “Okay, I know this movie was terrible. But at least this was good. Or that.”

The writing (additional screenplay by  Manoj Beedha and Ramesh Marabu) is terrifyingly bad. Dialogues sound like news tickers conveying the essence of context but hardly any depth.

The performances almost always come from cues; the sad look, the surprised look, the “shocking” look, the turning-away-the-face look, the wannabe cool look.

Let me not get started on the camera that turns its gaze when the heroine — who cannot get one line right in Tamil — gets to talk. Her name is, wait for it, Aadhirai. The name means “special star” in  Tamil.

she is not a “love interest” but a  documentary filmmaker. She actually has a profession. How cool is that? Santhanam plays Kannayiram, which translates to someone who has a thousand eyes. But there is a big, blind spot in the screenplay.

The core of Agent Kannayiram is quite solid. Think about it, a man who is traumatized by memories of his dead mother, and who couldn’t even get to say a final goodbye to her, gets personally and emotionally attached to a case of unclaimed dead bodies.

By trying to solve the mystery, it is as if he gets some sort of relief and peace with his inner self. This would have been a different film with a  competent filmmaker at the helm. Another filmmaker might have focused on this very personal story of a mother-son.

Agent Kannayiram ends up being an exasperating watch lacking a  soul, fittingly, for a film about dead bodies and lonely deaths.